Queer/Feminist/Praxis | Intersections of Performance, Visual Arts, and Activism in Korea and the Korean Diaspora 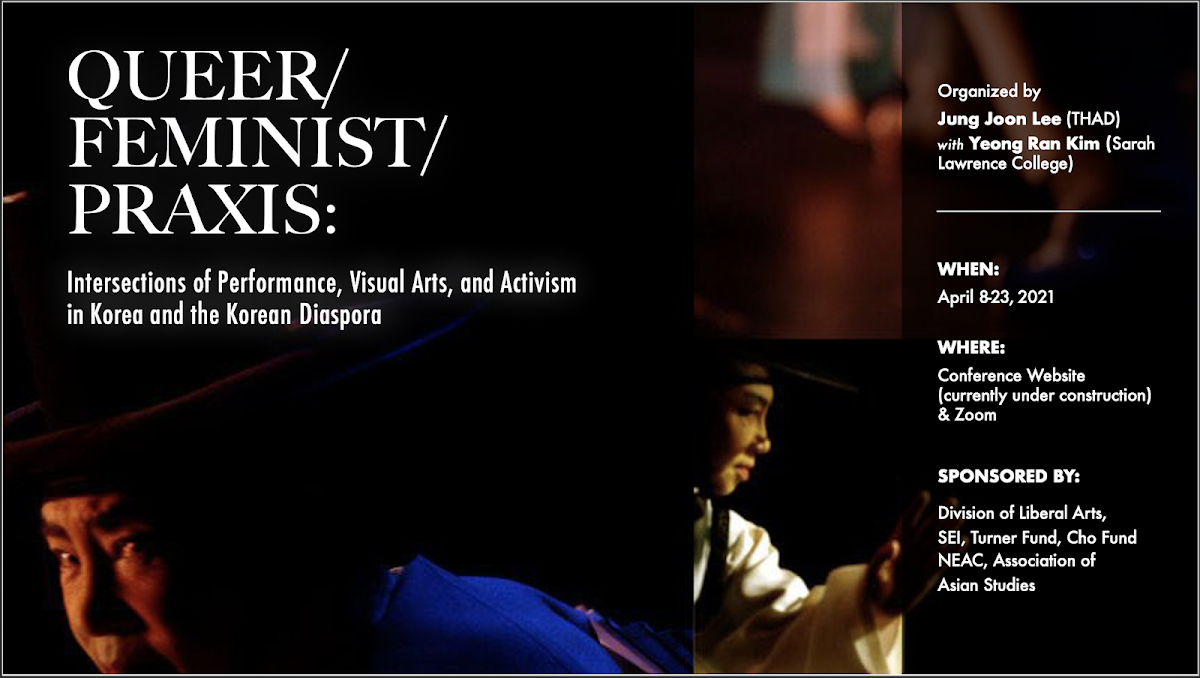 This international conference brings together scholars, artists, designers, and filmmakers to explore visual arts and activism revolving around the LGBTQI+ and feminist experience in South Korea and the Korean diaspora. Initially planned as an in-person event at Rhode Island School of Design in April 2020, the conference is now scheduled to be held in virtual format at RISD from April 8 to 23, 2021.

The three- weeklong conference will feature scholarly panels of speakers, performance and film screenings, artist’s talks, roundtable discussions, and a virtual exhibition. The conference events share a special focus on the discourse and praxis of queer feminism in contemporary cultural productions of Korea and the Korean diaspora.

While South Korean feminist and LGBTQI+ activists, scholars, and artists have transformed both the discourse of queer feminism and the everyday praxis of queer living, the academic response to the ground-breaking changes have been underwhelming. In anticipation of more fruitful conversations, the conference aims to unite the current scholarship, activism, and cultural productions reflecting the on-going transformation of the field. The goal of the conference includes enlivening cross-Pacific dialogues on the visual culture of queer/feminist experience in Korea and Korean diaspora. Additionally, an edited volume is planned to foster continued exchanges between participating artists and scholars.

Founded in July 2018, Feminist Designers Social Club is a community of graphic designers dedicated to exposing the gender discriminatory structure of the field in South Korea and establishing new systems of design practice from feminist perspectives.

For Queer/Feminist/Praxis, the four FDSC members, In-ah Shin, Younghwa Kang, Ee-rang Park, and Sun-ah Shin discuss what it means to practice feminist design and cultivate communal support for each other’s praxis. The roundtable is moderated by Minkyoung Kim, Assistant Professor of Graphic Design at RISD.

6:15-7:45pm ET
Queer and Trans Activism in Korea and the Korean Diaspora

The Korean filmmaker and artist KyungMook Kim discusses his films that portray the lives of marginalized beings in South Korea and his current works in progress with Una Chung, Associate Professor of Literature and Media at Sarah Lawrence College. Kim’s award-winning film, Stateless Things (2011), will be screened prior to his artist’s talk.

The Seoul/Chicago-based artist Sungjae Lee performs live on Zoom, “My Own Private Iowa,” first performed in Chicago in 2018, based on his autobiographical experiences. For Q/F/P, Lee reconstructs his original installation, including a shrine for commemorating his family’s first encounter with the United States and for speculating his own racial, sexual, and religious identities. Following his live performance, Lee discusses his queer performative praxis with Avishek Ganguly, Associate Professor of Literary Arts and Studies at RISD.

The LA-based artist Kang Seung Lee has been forming and supporting intergenerational queer kinship through collaborative artmaking and queer archive building. Lee discusses his recent work in Korea and the US and the affect of intergenerational caring in queer communities with Lisi Raskin, Associate Professor of Sculpture at RISD.

The Seoul-based artist siren eun young jung has been ceaselessly pursuing artistic praxis that is simultaneously aesthetic and political. For Q/F/P, siren discusses her feminist-queer praxis across visual art, film, and performance, focusing on her decade-long, award-winning work Yeosung Gukgeuk Project with Yeong Ran Kim, a Mellon Digital Media Fellow at Sarah Lawrence College. Deferral Theatre (single channel video, 2018) will be screened prior to this event.

Founded in 2018, Hyperlink Press is an online publication and curatorial collective to create intersectional platforms to showcase work by artists navigating the in-between spaces. For Q/F/P, the founding members of Hyperlink Press, Taehee Whang, Jeong Yoon Lee, and Minsoo Thigpen discuss their work inspired by South Korean online LGBTQ communities in the 2000s and share the time of utopic excitement for an equal world, breaking free from the traditional forms of community building. The roundtable is moderated by Yeong Ran Kim and Jung Joon Lee, Associate Professor of Theory and History of Art and Design at RISD.