Fabric of Immortality: Ancestral Power, Performance, and Agency in Egungun Artistry | A discussion with author Bolaji Campbell and Cheryl Sterling 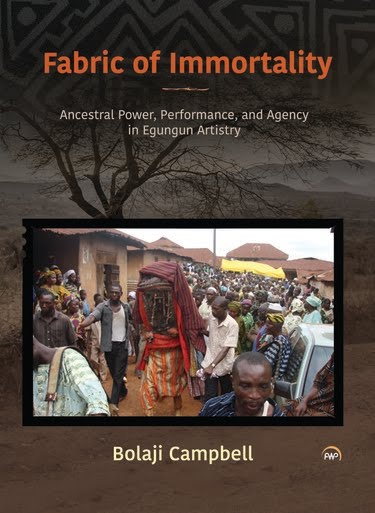 Fabric of Immortality focuses on Egungun masking, a unique cultural tradition practiced by the Yoruba of West Africa and their descendants in the African Diaspora, particularly in Brazil, Cuba, the Dominican Republic, Barbados, Trinidad, Venezuela and the United States of America. Egungun performances provide a vehicle and arena for dialogic reflections and celebrations, parody and play, and communication between the living and the departed, the seen and the unseen, upon which the stability of the human community and the universe is dependent. A great many varieties of these masks celebrate the guild of hunters and warriors, legendary heroes and heroines and founding ancestors including the legion of divinities straddling the landscape of Yoruba universe. Dr. Campbell will discuss the book with Dr. Cheryl Sterling.

Bolaji Campbell, PhD is Professor of African and African Diaspora Art in the Department of Theory and History of Art and Design at RISD. Campbell holds a PhD in art history from the University of Wisconsin, Madison and MFA and BA degrees in fine arts from the Obafemi Awolowo University (formerly University of Ife) in Ile-Ife, Nigeria. He has previously taught at Obafemi Awolowo University, the University of Tennessee at Knoxville, the University of Wisconsin, Madison and the College of Charleston in South Carolina. He has received numerous honors and awards, including the Sylvia and Pamela Coleman Fellowship, Metropolitan Museum of Art, New York; The Richard A. Horovitz Professional Development Fund Fellowship, Institute of International Education; and a Postdoctoral Fellowship, Avery Research Center for African American History and Culture. His publications include Fabric of Immortality: Ancestral Power, Performance and Agency in Egungun Artistry (Africa World Press, 2020) Painting for the Gods: Art and Aesthetics of Yoruba Religious Murals (Africa World Press, 2008) as well as numerous essays in learned journals.

Cheryl Sterling Ph.D., is an Associate Professor of English. She is a Fulbright Scholar and recipient of numerous grants including the Organization of American States fellowship. She is the former Director of Black Studies at The City College of New York (CUNY). Her teaching and research interests overlap the areas of identity, representation, and aesthetics in African and African Diaspora Literature, Post-Colonial Theory, Critical Race Theory, Gender Studies, Social and Cultural Movements in Brazil. She has published numerous critical essays in noted journals and in texts such as Migrations and Creative Expressions of Africa and the African Diaspora, Narrating War and Peace in Africa and Archipelagos of Sound: Transnational Caribbeanities, Women and Music. She is the editor of a special issue of WAGADU: A Journal of Transnational Women’s and Gender Studies on African and Diasporic Women’s Literature (Winter 2017). Her award-winning book, African Roots, Brazilian Rites: Cultural and National Identity (Palgrave MacMillan 2012), investigates African roots matrix ideologies in the literary and performance traditions of Afro-Brazilians. Her edited volume, Transnational Trills in the Africana World explores the overlap of politics and creative production (Cambridge SP 2019). Prof. Sterling is currently working on a book that creates Aesthetic theory based on Yoruba Orisha paradigms to read African and African Diasporic texts and images, and another edited work called, Transnational Fictions, focusing on the Africana women’s writings.