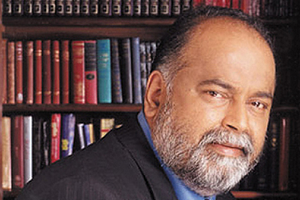 In this lecture renowned socio-cultural anthropologist Arjun Appadurai will revisit some of the key propositions about globalization, modernity, and contemporary cultures first offered in his groundbreaking book Modernity At Large: Cultural Dimensions of Globalization (University of Minnesota Press, 1996) in light of recent developments in the digital, political, and economic spheres.

Arjun Appadurai is the Goddard Professor in Media, Culture and Communication at New York University, where he is also Senior Fellow at the Institute for Public Knowledge. He serves as Honorary Professor in the Department of Media and Communication, Erasmus University, Rotterdam, Tata Chair Professor at The Tata Institute for Social Sciences, Mumbai and as a Senior Research Partner at the Max-Planck Institute for Religious and Ethnic Diversity, Gottingen. He was previously Senior Advisor for Global Initiatives at The New School in New York City, where he also held a Distinguished Professorship as the John Dewey Distinguished Professor in the Social Sciences. Arjun Appadurai was the Provost and Vice President for Academic Affairs at The New School from 2004-2006. He was formerly the William K. Lanman Jr. Professor of International Studies, Professor of Anthropology, and Director of the Center on Cities and Globalization at Yale University. Appadurai is the founder and now the President of PUKAR (Partners for Urban Knowledge Action and Research), a non-profit organization based in and oriented to the city of Mumbai (India).

Arjun Appadurai | Is Modernity Still At Large? Global Cultural Flows in the Digital Era from RISD Media on Vimeo.