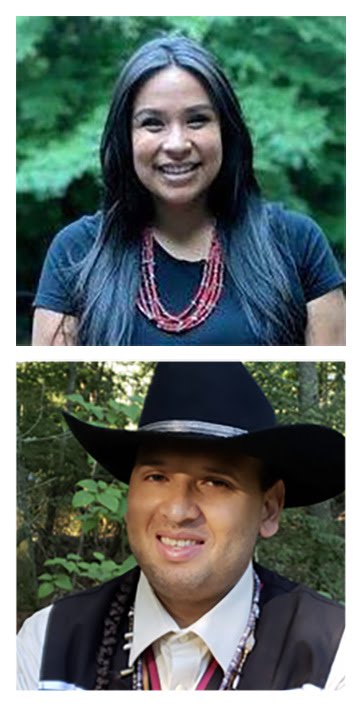 This interdisciplinary slide discussion of Narragansett landscapes, in which Providence is situated, focuses on the relationships Native people have had and continue to have with this place since time immemorial. Learning about Rhode Island history begins with understanding the ecological and cultural history of Narragansett homelands, settler colonialism's dispossession of land and culture, and contemporary methods of Indigenous survivance here. Join Cassius Spears Jr. (Narragansett) and endawnis Spears (Diné/ Ojibwe/ Chickasaw/ Choctaw) as they discuss Narragansett ties to this place through ecological knowledge, kinship, culture, and resilience. Cassius brings with him Narragansett environmental, cultural, and governance knowledge and endawnis will help contextualize the reclamation work tribal nations are doing here within movements across Turtle Island.

endawnis Spears (Diné/ Ojibwe/ Chickasaw/ Choctaw) received her Bachelor of Arts degree in Anthropology from the University of Denver and has worked for the Heard Museum, Museum of Northern Arizona, Mashantucket Pequot Museum and Research Center, was a Peabody Essex Museum Native American Arts and Culture Fellow, and currently serves on the board of the Federation of State Humanities Councils. endawnis is the Co-Director of the Upstander Academy, a Boston based intensive professional development equipping classroom and public history educators with tools to teach about genocide. She is the Director of Outreach and Programming and founding member of the Akomawt Educational Initiative, an Indigenous education and interpretive consultancy for museums, K-12 schools, and colleges/universities. Originally from Camp Verde, Arizona, she lives in her husband’s homeland, occupied Narragansett territory (present-day Rhode Island), with their four children Nizhoni (8), Sowaniu (6), Giizhig (4), and Tishominko (2).

Cassius Spears, Jr. is the First Councilman for the Narragansett Indian Tribe of Rhode Island and is passionate about land stewardship, conservation, and traditional foodways in Rhode Island. His paternal side taught him compassion by practicing respect for the land, water, and the soil. His maternal side taught him humility by encouraging him to participate in community, ceremony, and public service. This knowledge helped him understand conservation as a spiritual relationship between people and place. Cassius sees foodways as society's direct connection to regenerative conservation and believes that Indigenous socio-ecological relationships are a model for sustainability. Cassius graduated from the University of Rhode Island in 2010 with a B.S. in Environmental Management and Science. He is the Narragansett Indian Tribal delegate for the National Congress of American Indians and has served on the Board of Director for the United Southern and Eastern Tribes since 2015. Cassius works for the Natural Resource Conservation Service as a District Conservationist.