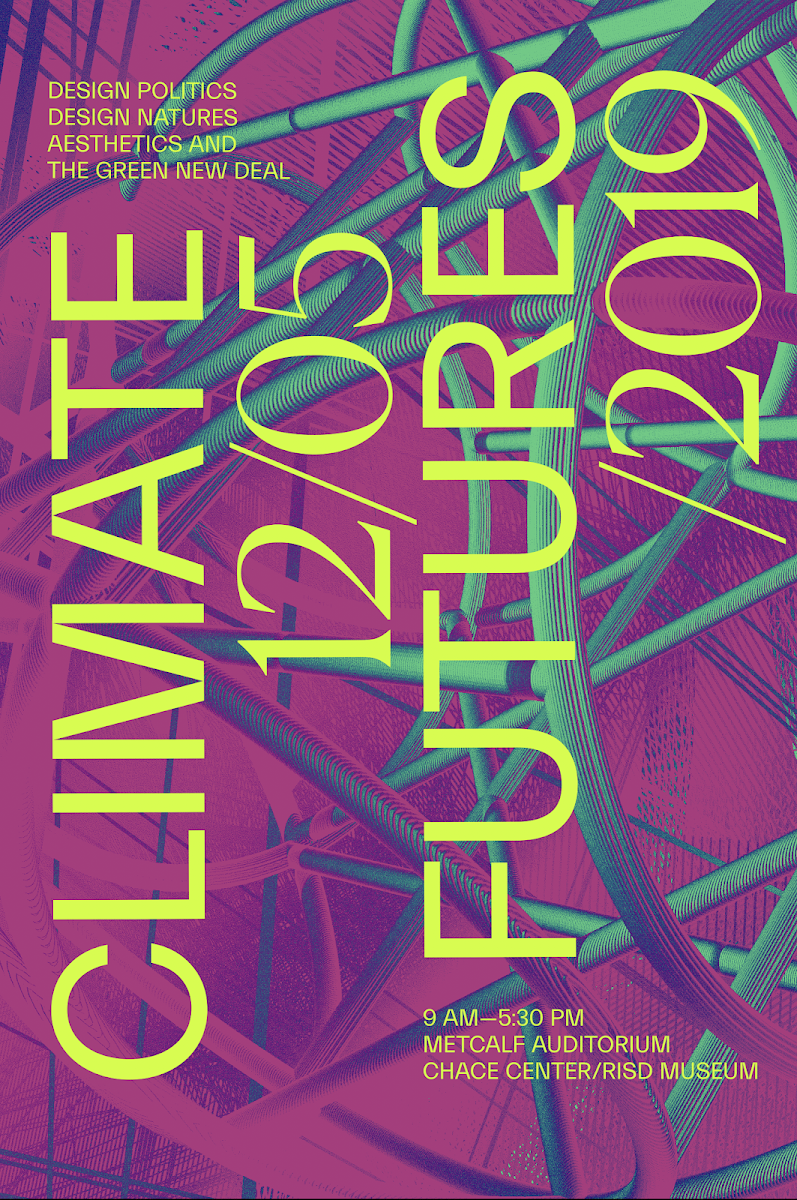 Over the last two years the Green New Deal has come to define how we might think about just post-carbon transition in the United States. Whilst denounced by some conservatives and liberal ecomodernists as implausible and dismissed by assorted climate doomsters as too little, too late, it still stands as the only game in town for thinking about post-carbon futures. This symposium seeks to shine a constructive, yet critical, light on not only the potentialities but also the limitations of the Green New Deal as a political, design, cultural, technological and aesthetic discourse and praxis.

The Green New Deal has generated a rich series of policy debates about the ways in which just transitions could be stimulated and enacted. It has served as a reminder of the many admirable ways in which the old New Deal defined a vision of public works and public design, infrastructure and planning for the public good. However - and as many Green New Dealers are well aware - the original New Deal was also marked by multiple exclusions and a complicated racial, gender and labor politics. It worked with a political imaginary largely bounded by the US nation state. Its more radical ambitions were ultimately constrained and contained. A Green New Deal will have to mobilize against fossil capitalism and an emboldened White supremacy in very different ways to the old New Deal. It will have to address a global climate emergency that will require building new forms of solidarity across borders and boundaries. It will also have to open up discussions about the socio-technical and political design pathways to post-carbon futures in ways that might force us to move beyond the aesthetic and design horizons of “small is beautiful” era environmentalisms without tumbling back into a paternalistic liberalism.

If the policy context that could inform a Green New Deal is slowly coming into view, the cultural, aesthetic, socio-technological or design politics that could further support and radicalize a new Green New Deal is less in evidence. This could stand as a significant limitation to further progress given that we know that just transitions to post-carbon futures are not going to emerge though legislation alone nor will they be built through fear of extinction or declarations of the need for eco-austerity. Diverse publics will have to be mobilized at affective, cultural and political levels. A sense of political and creative agency, desire and perhaps even joy in the opportunities that exist for democratically designing and redesigning our worlds will all be vital for enacting just post-carbon futures. The just transition, understood as the Green New Deal or otherwise, will have to be imagined and built, fabricated and realized, coded and created. Politicized processes of making, of prefiguring, that occur again and again and again are going to be constitutive features of the attempt to build survivable futures on a rapidly warming planet. New forms of art and cultural production, new modes of solidarity and care, a new design politics residing in new public institutions residing in many democratic spaces will be required to disarm the fatalists and the fanatics. This symposium seeks to consider how a Green New Deal might help us face down the climate doomsters and denialists, think beyond technocrats and technophobes and build creative political ecologies for the future.

The architectures have, to date, been somewhat inconsistent champions of just transitions for low carbon futures. Sustainable design, with its rather one-sided focus on deriving “lessons from nature”, has historically displayed limited interest in class, race, labor, gender, or broader power relations. Design schools and design professionals have regularly proclaimed that they can play a leadership role in building low carbon futures but then continually returned to “business as usual agendas”. The call for a Green New Deal, though, has raised hopes that more radicalized visions of architecture, landscape architecture and interior architecture could be renewed, revitalized and reworked in more sophisticated ways. In this panel we will consider the extent to which new forms of public works for the public good in sustainable urbanism, green infrastructure and adaptive reuse could push back against green gentrification and green neo-liberalism. We will explore the ways in which labor struggles for just working conditions within architecture and design could ally and reinforce the call for a Green New Deal. We consider how architectural innovations with virtual reality could open up community engagements with sea level rise. Finally, we struggle with the extent to which the national imaginary of a Green New Deal can address the profound cross-border impacts and global design challenges posed by climate change.

Sponsored by the Division of Liberal Arts

Industrialized energy has long been predicated on a system of racial capitalism and colonialism. We rely on electricity, heat, and fuels that derive value through the historical and ongoing displacement and exploitation of indigenous, black, and Latinx land, labor and life. The Green New Deal could offer an opportunity to not only overhaul this existing fossil fuel infrastructure but also redress the racial capitalism on which it is built. In this dialogue, we will explore some of the tensions that currently exist between the urgent need to move as fast as possible to implement a clean energy transition and concerns that, if this transition is not done right, it could recreate new environmental injustices and new sacrifice zones. We will consider the ways in which environmental justice movements are productively contributing to new visions of energy transition. Finally, we will explore the opportunities that exist for confronting and dismantling racial capitalism through a Green New Deal framework, focusing on policies, strategies, and overarching principles.

Sponsored by RISD's Office of Social Equity and Inclusion

In the 1960s, Murray Bookchin argued that a post-capitalist ecological society would have to incorporate automation plus liberatory eco-technologies to provide the infrastructure of a new ecological society. Eco-design and eco-technology running alongside much broader forms of social change could not only reawaken humanity’s sense of dependence on the environment but restore selfhood and competence to a “client citizenry.” Contemporary debates on the socio-technical infrastructure that could underpin survivable futures have become increasingly anxious, ill-tempered and polemical. Whether we consider debates around 100% renewables or 100% clean, lab meat or the future of agriculture, either/or logics would seem to run through the ever sharper exchanges between de-growthers and ecomodernists. A worsening climate crisis is clearly exacerbating the stakes of the discussion and acting as a ratchet forcing reframings of our understanding of acceptable and unacceptable technologies. In this session we explore what exactly it might mean to advocate for liberatory technologies, design justice and a progressive technological politics in an age of climate chaos and cyborg ecologies.

Sponsored by the Division of Liberal Arts

Liberatory aesthetics for a just transition?

Building survivable futures on a warming planet is not simply going to involve policy for a Green New Deal. Just transitions to post-carbon just futures are inevitably going to raise very significant aesthetic, political and cultural issues about the worlds that we are leaving behind and the world that we need to design and make. The Green New Deal or the just transition more broadly has developed little in the way of a new aesthetic or cultural politics. Its primary co-ordinates have been to look back to the political and public aesthetics that emerged around the first New Deal of the 1930s or turn to the aesthetic that emerged out of predominantly white US environmentalisms of the 1970s. Do we need to find other ways to “stay with the trouble” to paraphrase Donna Haraway as we try and construct survivable futures? What might a joyful, aesthetics of a just transition look like that can come to terms with the loss of certain kinds of nature-cultures, modes of valuing and modes of making and be open to the challenge of designing new cosmopolitan nature-cultures, new ways of valuing and new modes of future making? Can we envisage an aesthetic and cultural politics that reclaims low carbon pleasures present in everyday life? Does a progressive cultural politics for a just transition require a broader decentering of Eurocentric or US centric environmental aesthetics and a more sustained engagement with the insights of decolonial, Latinx, post humanist, cosmopolitical and other currents? In this panel we ponder the kinds of liberatory aesthetics and cultural politics that could underpin the just transition and offer solidarity and hope across borders and boundaries.

Thinking beyond the ecology of panic: The political opportunity of the Green New Deal

The prospect that climate conditions may have reached a point of no return has now become a reoccurring motif of assorted climate doomsters who seem to delight in telling working and marginalized people that “their goose is cooked.” This is a politics that the Green New Deal clearly has to face down. An ecology of panic at best is going to feed “passive nihilism” (Connolly, 2016) and “melancholic paralysis” (Wark, 2015) but in addition it could feed the rise of eco-fascism and eco-apartheid. In this concluding session, we consider the extent to which a politics of a Green New Deal framed around the need for environmentally just investment and infrastructure, a fundamental reworking of class, race and gender relations, new modes of democratic planning and approaches to global politics focused on a new internationalism and solidarity across borders could open up very different paths.


Sponsored by The William R. Rhodes Center for International Economics and Finance, Brown University and The Institute for Environment and Society